Home > About us > References

The long-term presence of SITTI in the Voice Communication Systems market and its standing interest in new technologies is testified by a set of awards our comany has received over the past years. Among them, the following are of particular interest, because of the direct involvement of SITTI in the current cutting edge technology for voice and data integration: Voice over IP (VOIP). 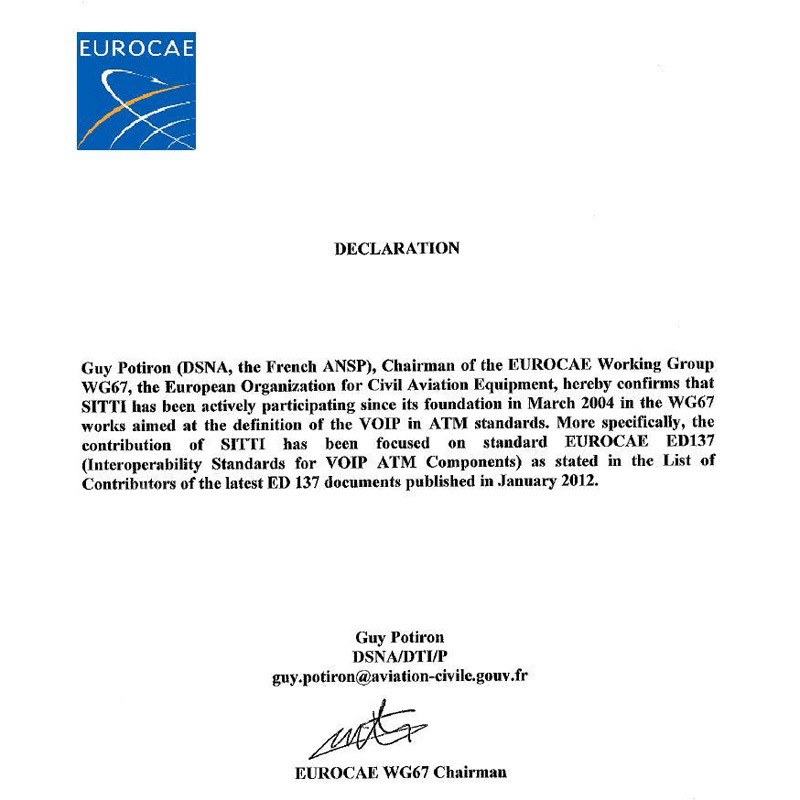 WG67 is the Working Group within EUROCAE that defined the ED137 VOIP Standard. SITTI is an active member of EUROCAE WG67 since its foundation.

The many decades of successful presence in the VCS market allowed SITTI to transfer their huge experience into the definition of the ED137 VOIP Standard, thus contributing to the finalisation of a robust protocol for data and voice integration onto a common infrastructure. 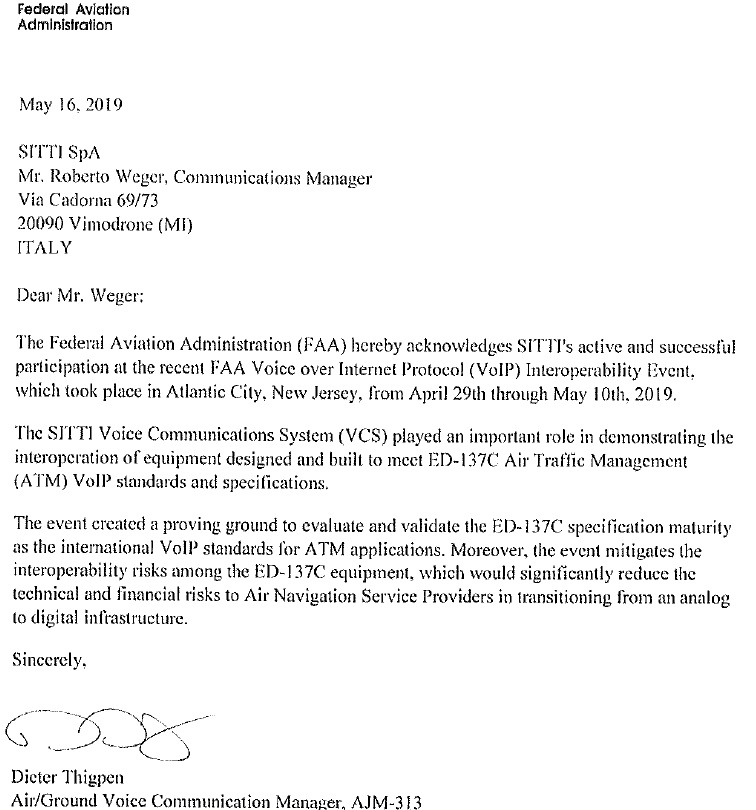 In May 2019, the Federal Aviation Administration (FAA) in the USA hosted a very important event, aimed at the verification of the true interoperability between equipment from different vendors. The goal was to check whether VCS systems, radio devices and recorders can work together using the brand new ED137C standard, i.e. the C version of the world famous ED137 standard on VOIP in the ATM field.

SITTI was among the 14 vendors that gathered in Atlantic City to run a large number of tests, thus proving the completeness and robustness of the standard on one hand and of their equipment on the other hand. Pairings between all vendor equipment have been executed, in order to allow e.g. SITTI VCS system to be interfaced to any other VCS, Radio, Recorder from different manufacturers. 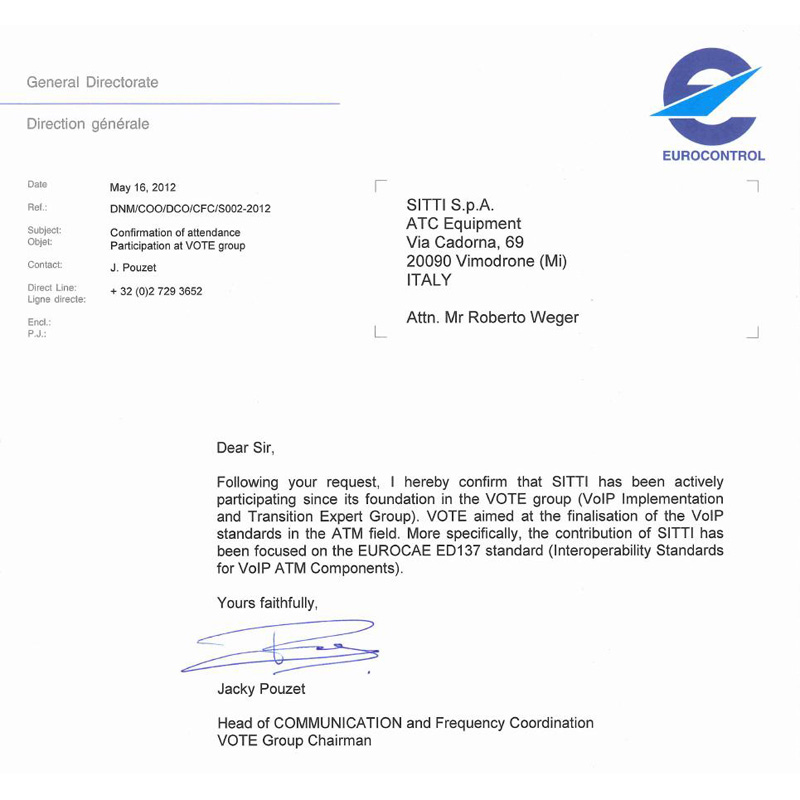 VOTE (VoIP in ATM implementation and Transition Expert-group) is a working group created by EUROCONTROL aimed at addressing implementation and transition related issues for the introduction of VOIP in ATM (Air Traffic Management) and at identifying solutions and recommendations to all interested parties:

SITTI is part of VOTE since its foundation and proactively provides significant inputs to the definition of VoIP solutions for Air Traffic Management. 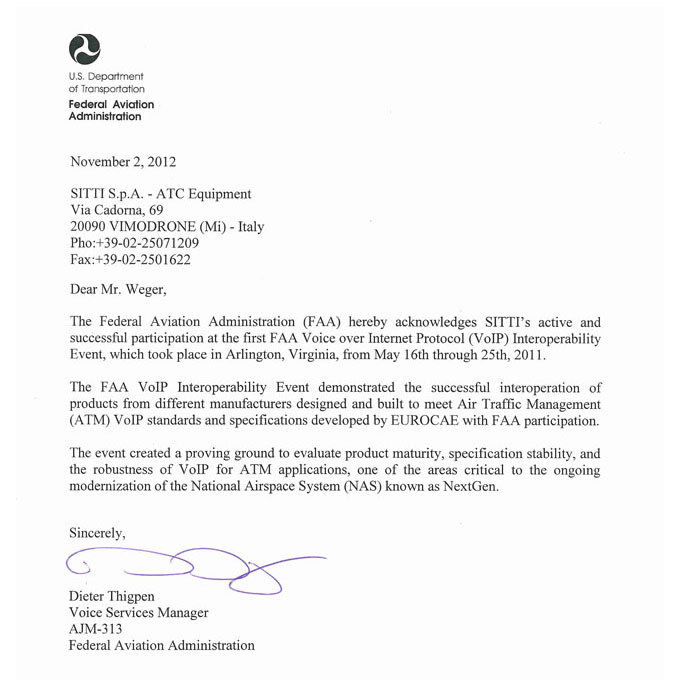 In May 2011, the Federal Aviation Administration FAA of the United States of America organized a VOIP Interoperability Event.

The purpose of such big event was to verify interoperability among different suppliers of ED137 VOIP standard compliant equipment, also including FAA specific requirements. A large number of VCS and Radio manufacturers from different continents interfaced their equipment to carry out a long set of tests. The interoperability event at FAA proved to suitability of the ED137 VOIP standard for the Air Traffic Control needs. 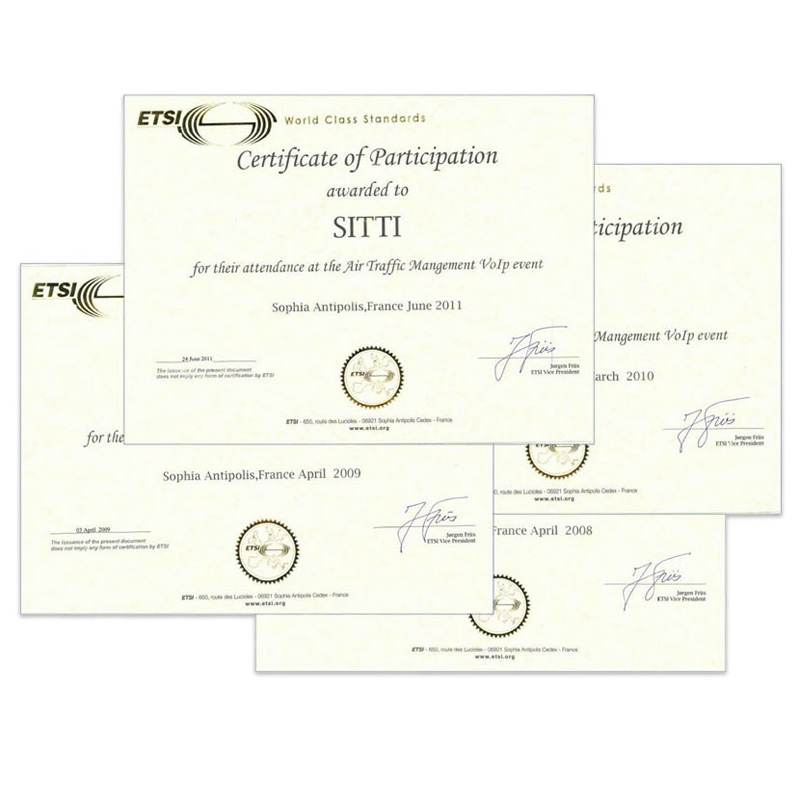 SITTI has been participating in all VOIP PLUGTEST events organised by ETSI (European Telecommunications Standards Institute).

The purpose of these events was to test and validate interoperability standards defined by EUROCAE. The major VCS and Radio manufacturers gathered together and put their equipment side-by-side to perform a long set of tests to prove their compliance to the ED137 VOIP standard.

About us
Choose Your Language
Contact us for further information
S.I.T.T.I. SpA